nytimes_Call it the zombie version of Art Basel Miami Beach. The annual fair, originally scheduled to unfold next week with the contemporary art world converging in South Florida, was canceled in September by its Swiss-based organizers — a cultural casualty of the coronavirus. Over a dozen Miami satellite fairs followed suit, all mirroring Basel’s pivot to online “viewing rooms.” The art circus, it seemed, was not coming to town.

Yet this week, Miami’s art scene was anything but quiet, even as the number of Covid-19cases and deaths rose, giving Miami-Dade the highest per capita rate of any large county in Florida. Previously closed museums announced ambitious new in-person exhibitions, from public institutions like the Pérez Art Museum Miami to the open-to-the-public privately owned Margulies Collection at the Warehouse. Galleries were likewise rolling out formidable solo shows, as were hotel lobbies and poolside bungalows. One leading fair had sprung back to life: Design Miami, partly owned by Art Basel, was being staged in a scaled down manner, with 10 galleries setting up inside a storied building on the mainland.

The local pandemic toll is jarring: During the past seven days, Miami-Dade County, which includes both Miami and Miami Beach, recorded 49 new deaths from Covid-19, and nearly 13,000 new infections. With epidemiologists expecting those numbers to rise, it’s worth asking: Is Miami’s art world paying attention?

While the city’s in-person art-scene activity was being billed as masked, socially distant, and crowd controlled, it was hard to ignore the symbolism of the Miami Beach Convention Center — the planned site of the canceled Basel fair — currently being used as a coronavirus testing site. (Its next planned event? February’s Natural Disaster Expo.)

“I understand some are saying ‘Oh my God, this will be a disaster to do this kind of thing,’” Craig Robins, founder of Design Miami, said. “It’s the opposite. It’s not about a bunch of people flying in from around the world. It’s about a bunch of people spending the season in South Florida and doing things that they feel are within boundaries that are responsible.”

Mr. Robins said he already had a model in place: the luxe retailers that fill 18 square blocks of Miami’s Design District neighborhood, of which he and his partners own about 75 percent and where they have mandated strict health protocols since May for some 200 tenants who remain open, including Hermès, Louis Vuitton and Gucci. Adding the Design Miami fair to that mix by installing it in the district’s Moore Building, he noted, was a natural fit. “From a consumer point of view, what’s the difference between luxury fashion or high jewelry and art or design?” Mr. Robins was also renting nearby spaces to pop-up art galleries from New York, coming down for the week, from seasoned players like Jeffrey Deitch and Mitchell-Innes & Nash to the scrappier Ramiken.

For now, a virus-minded countywide midnight curfew remains in place, but would that discourage the late-night bacchanals that were the hallmark of many Design Miami and Art Basels of years past? “I wouldn’t be going to any of those dinners,” Mr. Robins insisted. “This is not for people who want to come to the party, because there won’t be one.”

People waiting at a Covid-19 testing site at the Miami Beach Convention Center on Nov. 21.

Not everyone appears to have gotten Mr. Robins’s memo. The New York socialite Libbie Mugrabi, fresh from a divorce settlement from her powerhouse art dealer husband David Mugrabi — which reportedly netted her upward of $100 million — said she was not only winging into Miami, but also intended to host a Miami Art Week event “with only A-listers and artists” at the Faena Hotel.

“Do you remember Aby Rosen’s dinners at the W Hotel?” she asked, citing that developer’s celebrity-studded Miami Basel gatherings. “Every year it was the talk of the town.” This year, she promised, “My dinner is going to replace Aby Rosen’s dinner.”

Beyond hosting a memorable evening, she intended to reinvent herself as a cultural impresario in her own right: “Now I settled a divorce and I have a lot of money,” she said matter of factly, while declining to provide financial specifics. “And I can do whatever I want with it. It’s my choice. And this is what I want to do.”

Ms. Mugrabi brushed aside concerns that her dinner was a potential superspreader event with strangers from around the country. “It’ll be like 50 people max,” she said. “Everybody that will be at the dinner will have to submit Covid tests or be tested there. I will send a tester with a rapid test.” And the notorious unreliability of rapid tests? “They can wear a mask if somebody wants,” she said. “I won’t wear one, but other people can.”

The rest of Ms. Mugrabi’s schedule in Miami seemed like old Basel times, with a dizzying array of product launch promotions: “I’m starting a brand where it’s all about the healing. It’s about art, the art of fashion, the art of beauty, the art of art, the art of — of whatever.”

The artist Jared McGriff at the Spinello Projects gallery in Miami, where his show “Only Touching the Ground to Jump” will be on display

The challenge for some was how to promote homegrown talent in a city where large numbers still refuse to take basic precautions against the coronavirus. The Miami artist William Cordova and his collaborators believe they have solved the problem. Enter the A.I.M. Biennial, organized by Mr. Cordova with Gean Moreno, a curator at the Institute of Contemporary Art, Miami; Mikhail Solomon, director of the Prizm Art Fair, and Marie Vickles, director of education at the Pérez Art Museum Miami and a curator at the Little Haiti Cultural Complex. They selected 69 multigenerational artists largely from Miami — including Mark Handforth, Jessica Gispert, Kerry Phillips and Onajide Shabaka — to create site-specific installations in far-flung outdoor spots, many in neighborhoods endangered by climate change. A.I.M.’s name — shorthand for “Art in Movement” — highlights its driving spirit: these are places literally sinking beneath the Atlantic Ocean. Best to see this art now. 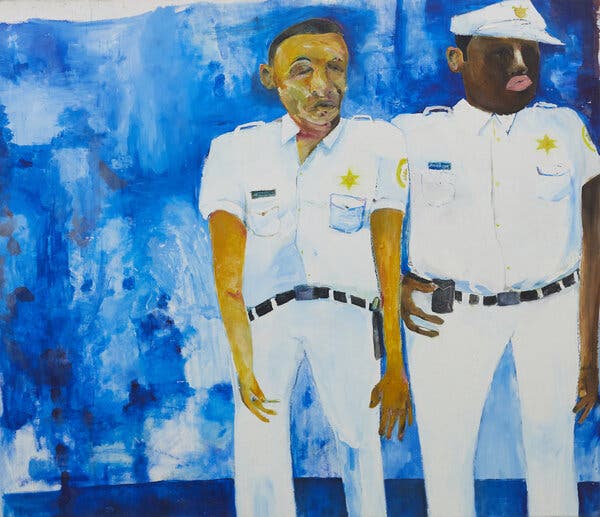 Of course, installing large weatherproof sculptures in a vacant lot is one thing. But what about the traditional painters invited to participate in A.I.M.? Were they expected to just hang their work where it could be rained on, or taken home by an overenthusiastic art lover? “I wanted to prod practitioners to be more resourceful, more improvisational, to not let them forget that they are creative problem solvers,” Mr. Cordova said.

He pointed to the painter Kristen Thiele, known for her beguiling oil-on-canvas evocations of studio-era Hollywood films. For A.I.M., she returned to her earlier days as a screen printer, creating a large poster of a 1950s movie house audience wearing 3-D glasses, emblazoning it with the credo “SCIENCE is not FICTION.” Multiples of the poster were plastered onto the facade of a boarded-up theater near her studio.

“For some of the younger artists who are still in school or who just graduated, they have a different experience of art,” Mr. Cordova said. The pandemic — and its initial shutdown of not only gallery sales, but the day jobs so many artists depend on as art handlers and installers — made it painfully clear that artists would have to adapt. “But if you’ve been working in South Florida for the last 20 years,” Mr. Cordova said, before an art market boom and its ancillary economy existed there, “it’s like a stick shift, you just change gears. You don’t have to have a budget or a museum to sponsor you.” 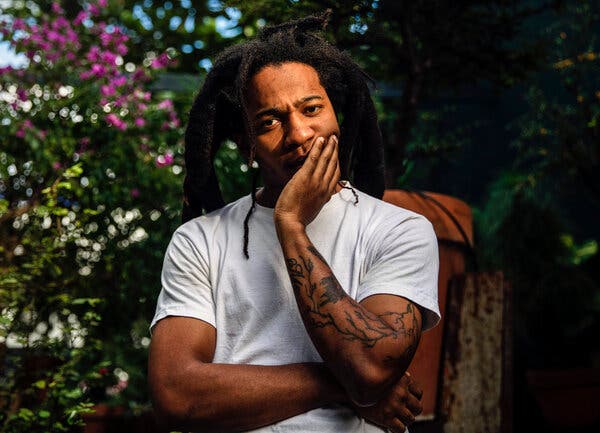 The artist Reginald O’Neal at the Spinello Projects gallery in Miami, where his show, “At the Feet of Mountains,” will be on display.Credit...

The more familiar Basel model was already showing surprising strength though, as evidenced by the flurry of sales over at the Allapattah neighborhood’s Spinello Projects, which focuses on Miami artists. A pre-Thanksgiving opening featured the solo debut of Reginald O’Neal and the second solo outing from Jared McGriff. Each painter’s work addressed topical issues — from policing in the Black community and the carceral state to the hospitalization of family members. Mr. McGriff’s ethereal depiction of two policemen in plantation whites, “Overseer, Overseer, Officer,” fuses an otherworldly sense of beauty with the more troubling note sounded by its title. Mr. O’Neal’s portraits of his incarcerated father and younger brother — both in their prison jumpsuits — are tender, and all the more striking for their directness. The ICA Miami and the NSU Art Museum-Fort Lauderdale have already purchased works from both shows; the remaining four paintings by Mr. O’Neal have just been acquired by the Miami collectors Mera and Don Rubell. 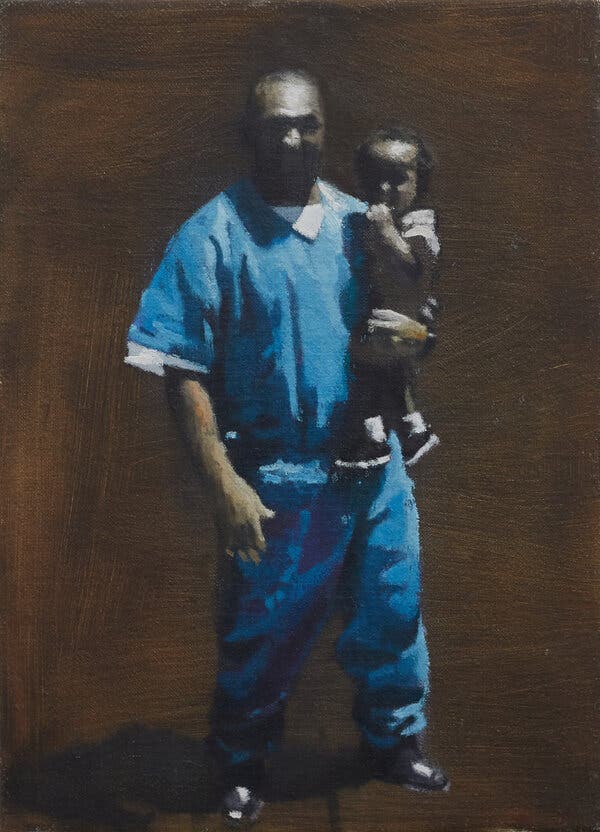 Mr. O’Neal, in an interview, said that he had conflicting feelings about Art Basel’s influence on Miami. Having grown up in Overtown, one of the city’s poorest neighborhoods, yet right on the edge of the Wynwood neighborhood as it became ground zero for Basel’s satellite fairs and pop-up galleries, he said he’d seen firsthand how art-fueled gentrification transformed a once-affordable area. Yet that same carnivalesque atmosphere was precisely what pulled him into the art world.

“Wynwood changed my life, if I’m being honest,” he admitted, recalling the street art and spray-painted murals as the initial draw. But he soon found himself captivated by classical techniques drawn from the old masters.

Nearly a decade later, the art “kind of got watered down,” he said. Yet Art Basel also focused the entire city on art — even those who rarely set foot inside a museum. In that light, a Miami Art Week without a big Basel party could be a possible blessing, allowing the city’s own talent to take center stage and avoid being overshadowed.